Can I Use Cloth Nappies If My Baby is in a Hip Brace? 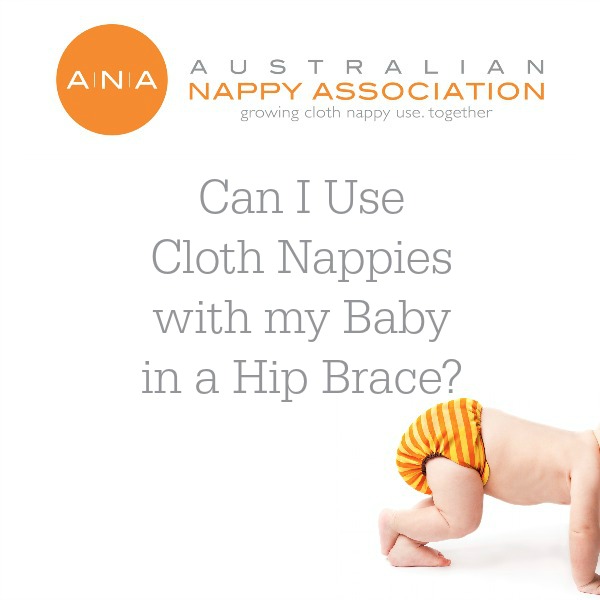 This week’s guest blog is from Eva Van Strijp.

Hip dyslasia is a condition affecting up to 1 in 50 Australian babies, yet chances are pretty good that you didn’t know much (or anything!) about it until your own or a friend’s baby was diagnosed.

Certainly that was the case for us. We had all four “F” risk factors checked off the list before our baby even entered the world (female, first baby, feet first, family history), yet the first we heard of it was when the paediatrician entered our hospital room with a Pavlik harness in hand. It was a little overwhelming, but the hospital staff were fantastic and it didn’t take us long to get our head around caring for our little “triangle baby”.

Thankfully, there are a number of non-invasive remedies for hip issues in babies, the main one being some form of brace, usually worn constantly over a few months. This can present cloth nappying families with doubts, particularly when the medical profession may not be aware of the plethora of cloth nappy solutions currently available. When our daughter was diagnosed with hip dysplasia more than 11 years ago, I asked if we could use cloth nappies. I already had a stash of 36 flats ready to go and was keen to use them if at all humanly possible.

The orthopaedic surgeon said that cloth was actually better for the baby’s hips than disposables, as it helped to keep them apart, but he advised against using them because they would likely leak and make the harness dirty. One thing you don’t want to have to do is wash a harness every few days, as having it off baby regularly or for extended periods reduces it’s effectiveness.

So I went away determined that if that was the only thing stopping us from using cloth, I would make it a non-issue! I had a pile of pull-up PVC pitchers ready to use over the 3 dozen flats, but they were useless with a harness, and a quick trip to Big W produced a couple of velcro closure covers. They weren’t very good quality and the design was rather poor, but they did the trick for a few weeks. I felt that surely there must be something better on the market… or at least a pattern that I could use to make my own. I discovered Baby BeeHinds bamboo fitted nappies and the rest, as they say, is history.

Today we share the stories of some parents who have successfully cloth nappied their babes while in some form of hip harness or brace. We thank them for their time in sharing their stories and tips and hope that you find some useful information or motivation. 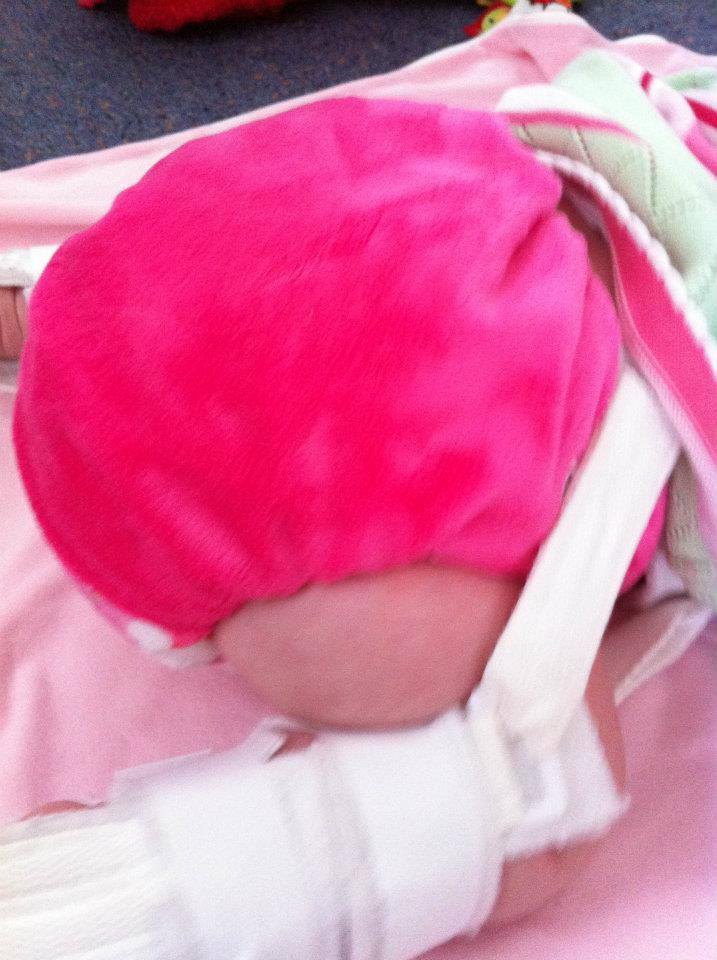 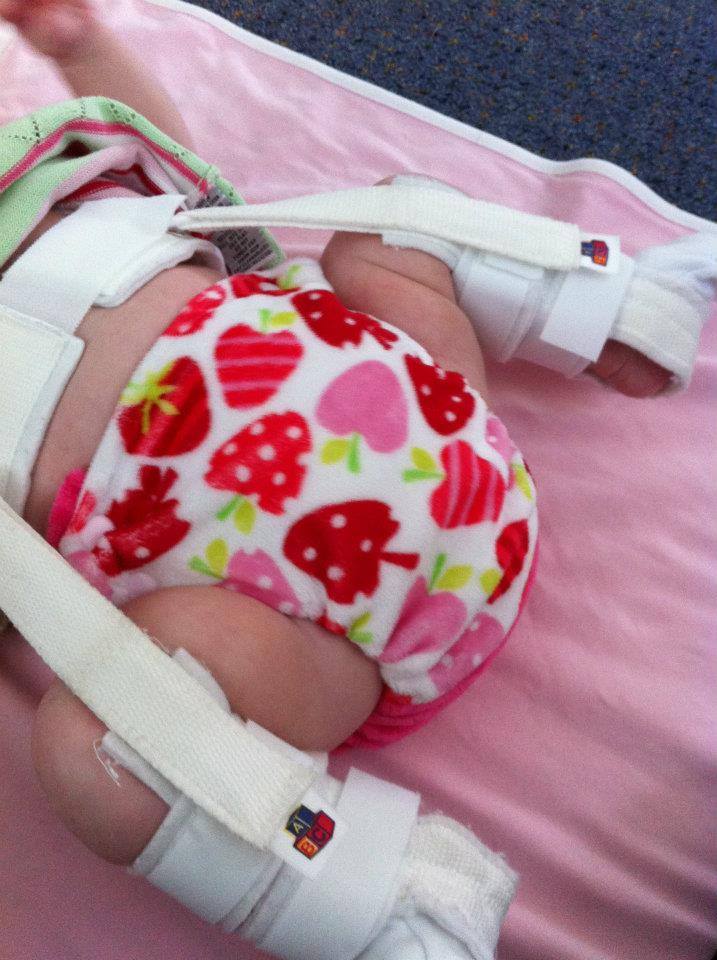 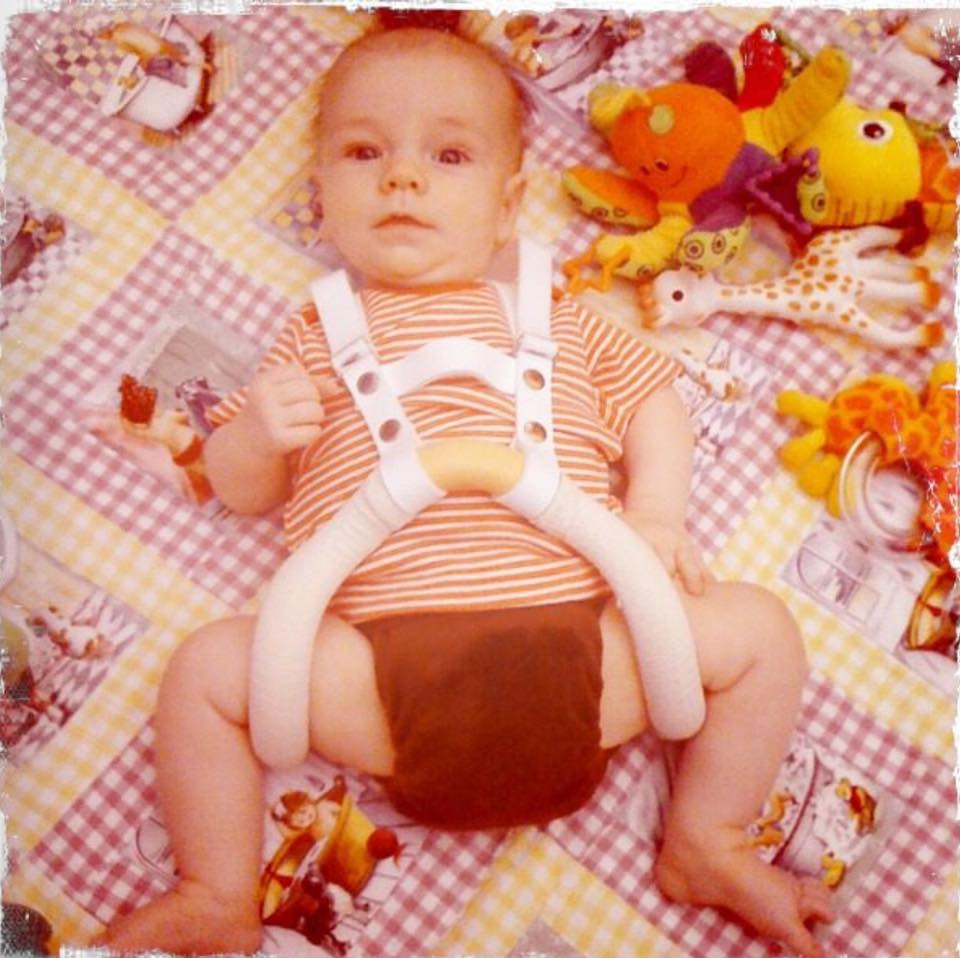 Joelene Colliton has had a lot of experience with braced babies in cloth nappies. “I have had three braced hippy babies, and have used cloth nappies with all (did also use disposables during bracing). I did find that the adjustable nappies worked better whilst braced (even though my preference is for a sized nappy in general), as we needed to go up a rise in height whilst braced.

The extra leg gusset of the itti Bitti tutto (and I assume any others similar) was useful for containing #2s in the froggy leg spread position. Whatever cloth nappy you choose, a good leg seal is essential!! I do remember a couple of warm wees clean escaping whilst breastfeeding in the brace due to positioning and, well, gravity!

We didn’t find a good overnight cloth solution when they were a bit older and in a rhino brace, as the bulk of a night nappy plus woollen soaker was just too much to get the rhino to fit well and maintain the hips in the optimal position. This was not so much of an issue in the correctio brace (nor I assume the Pavlick brace), as the bottom is clear from the harness anyway. Over summer, my firstborn just wore a cute cloth nappy and a tee or singlet – so cute! Here he is six years ago now, wearing a medium itti bitti at 3 months old!! My third is 9 months and still braced at night.”

“My son was in a brace for 5 weeks from hip dysplasia, and was in cloth with no problems at all.” Naomi Atherton 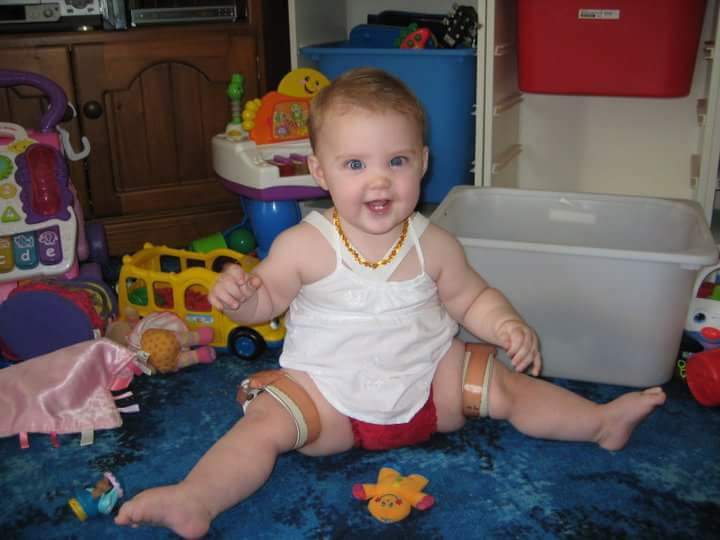 Paula Borlase’s daughter, Jessica, was 6 months old when she was put in a Dennis Browne Bar for the next 6 months. “We only used cloth nappies during that time. I preferred all-in-two nappies and sized up as the nappies needed a higher rise than before the brace. I found snaps easier but we did have a few velcro nappies.”

Paula’s other daughter, Emily, was in a Dennis Browne Bar from 3 to 6 months. “Nappies were trickier with her as the gap between her bottom and the bar was smaller so only very trim all-in-one or all-in-two nappies fit but as she got bigger it got easier.”

Eva Van Strijp is a mother of six, founding member of the Australian Nappy Association and creator of Seedling Baby. When Eva isn’t hanging out with her family or running a business, she’s eating chocolate, listening to podcasts or tending her veggie patch.