An article from Fiona from Darlings Downunder.

Anyone who’s spent much time researching the world of modern cloth nappies will eventually come across the term ‘China Cheapies’ or ‘CCs’. In this article I’m going to explain what a ‘China Cheapie’ is and why it is a term that I think we need to stop using.

From the Australian cloth nappy industry perspective, there are three types of cloth nappy manufactured in China. There is some overlap, but this is the easiest way to understand it:

The oldest, best known brands come from this. Vicki from Bubblebubs sewed her nappies herself at home and then outsourced to several other mums working from home before growing demand and the lack of suitable manufacturing facilities in Australia caused her to look overseas. The same story applies to Baby Beehinds, and Itti Bitti, and many of the Australian brands that have been on the market for 15 years or more. When these brands looked to China over a decade ago to meet the growth in demand, they already had a tried and tested design/pattern of their own, they had requirements about types and quality of fabrics and components that they needed, and they knew that there were concerns about overseas manufacturing. This led them to be very selective about the factories they chose to use.

There are newer brands that haven’t had the same ‘homegrown’ origin story as the older ones, primarily because it is now much easier to outsource manufacturing overseas from the beginning as resources and specialised fabrics and factories that can produce nappies are more readily available. These brands still design and pattern nappies themselves and often have fabric milled to their specifications or other custom requirements which must be accommodated by the factory.

Many of these brands visit their factories or undertake external audits and reviews. Different types of accreditation are also available for factories that meet certain criteria.

When modern cloth nappies took off, and a lot of overseas businesses started getting their nappies made in China, several US brands found that knock-offs of their nappies were being manufactured using cheaper fabrics and components and sold with their branding (one more recent-ish example, but there are heaps going back years: http://www.jenniferlabit.com/2016/07/21/counterfeit-baby-products-sold-at-amazon/). Pocket nappies (especially among US brands at this point) were super popular – Fuzzibunz patented the pocket nappy with stay dry inner in the US in 2000 and Wonderoos created the first pocket nappy with a snap down rise in 2002. Many of these pocket nappy designs started being copied and relabelled with the factory name or a new brand name. This was the origin of what is now known at the ‘China Cheapie’.

Today, a generic nappy is bought directly from the Chinese factory (from their website or through eBay or AliExpress or other outlets including the occasional reseller in Australia, though at a higher price). It is ‘homebrand’ with no fancy packaging, no marketing, no photoshoots, no retailers, no shops, no statutory warranty (though I note some factories are known to replace faulty nappies on request), no after care service, no education, no support. Its purchase doesn’t support Australian businesses, workers or families. 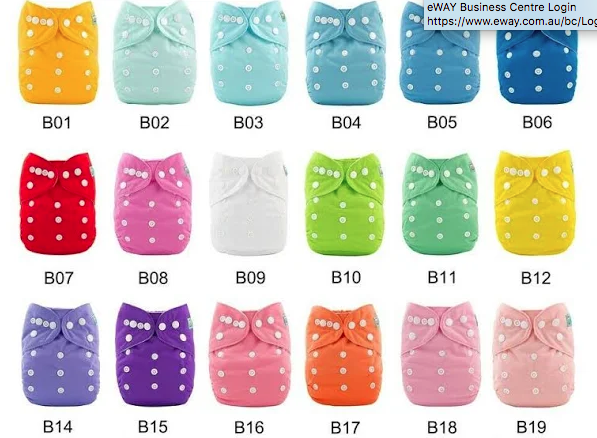 A generic nappy is (in most cases) a pocket nappy with a snap down rise and a single microfibre insert as standard. There is no standardisation of quality across different factories/brands – some factories have a good name, others not so much. The one thing that stands out is the price. You can buy a generic pocket nappy directly from a Chinese manufacturer for less than $5 each.

As a comparison, a WAHM (work at home maker/handcrafted) businesses sewing a workhorse nappy in Australia will generally have a raw materials cost (excluding their labour) of $20-$30 a nappy, and an Australian brand manufacturing in China will generally have a cost of $10-$20 per nappy excluding freight, GST and all the other business costs, depending on the nappy and the quantity ordered. The question of what goes into pricing a product is complex, but (leaving aside ethical/fair trade considerations which can be hard to gather data on, but certainly do play a part) some contributing factors making generic pocket nappies cheaper are a basic design, using a standard range of fabric and components, factory direct (no distributors or retailers), no need for customer service, economies of scale (it’s cheaper per unit to manufacturer 10,000 of a product than 1,000 for example), and the amount of absorbency the base nappy comes with. Microfibre is a much cheaper fabric than bamboo for example, and one single microfibre insert may be enough for a newborn, but certainly isn’t enough for the majority of children.

This is the part with the most crossover and where the most confusion can arise and really is a subset of the Generic Pocket Nappy.

Buying a white label product, where you put your brand/label on an existing product without making any changes to it, is common across many industries. A relabeled generic pocket nappy is when someone in Australia pays a little extra to have their own label attached to a factory brand. They can also make other changes – add packaging, choose colours, make some tweaks, but essentially it’s the same nappy that you could buy direct from the factory, but with a new name. They are sold at a higher price point than if you bought them direct from the factory, but (if you buy from an Australian business) you should get access to customer service, aftercare, and Australian statutory warranties.

A shopping list or menu nappy is created when someone in Australia (or any other country of course, but I’m speaking from the Australian perspective) approaches a factory that manufactures cloth nappies, and creates their own ‘design’ from the list of features that this factory already has available. So you could choose snaps or hook & loop fastening, legs gussets or not, 3 rows of snaps or 4, upgrade the fabric of your insert to bamboo or hemp, choose microfleece for your staydry layer or suedecloth, pick a colour range, colour code your snaps, round tabs or square, pocket opening at the front or the back, convert it to an All-in-2 with a snap. If you want to buy enough of them, it’s possible to have custom changes made too. Then the new brand’s label is sewn on to it. These nappies are often sold as ‘designed in Australia’ when that’s not really true as there’s been no pattern drafting or testing from scratch. However, you are more likely to get better absorbency as standard in your nappies, and you get Australian customer service and warranties too.

So that explains (hopefully!) what people mean when they talk about ‘China Cheapie’ nappies or ‘CCs’.

But here’s why we need to stop using the descriptor ‘China Cheapies’. It’s a cheap nappy made in China, yes. But what is it really implying about the nappy, and about the people who use them? I suggest this term has racist, classist and elitist overtones, and I believe that we can be honest about different types of nappies made in China and have conversations about the true cost of our consumption without attaching value judgements to products that alienate people and make cloth nappies less accessible.

‘Cheap’ is not always a bad thing, but we have to recognise that it can have a flavour to it that words like ‘budget’ or ‘economical’ don’t have. And why are we adding the country of origin here? Most Australian nappies are made in China. The majority of the products we use in our daily life are made in China. We don’t talk about our Chinese mobiles or appliances or clothes. When you consider Australian history from the ‘Yellow Peril’ and the White Australia Policy to the threats of a ‘flood’ of Chinese imports that have resulted in widespread claims of inferior products, child labour, and safety concerns for over 100 years, are we really just saying that this is a budget nappy made in China when we use the term? Or does it carry those value judgements – shoddy, inferior, exploitative, unsafe, foreign – that can then be transferred (however unintentionally) to those who use these nappies?

Is it a term that can make people who use them feel less-than? Can it be divisive? Do conversations happen online that could make parents feel like they have made a bad choice for their child? Can it stop parents asking for help, because they think they’ll be judged (and with no customer service attached to many of these nappies, they may need more help than others)? Can it push parents who perhaps feel like they don’t have a choice about which cloth nappy they can afford away from cloth altogether?

We want reusable nappies to be accessible to all, widely accepted, and want people to feel part of a community that supports and encourages each other. So we need to stop using the term ‘China Cheapies’.

Now, manufacturing in China is in no way perfect, and I’m not saying that you need have no concerns about how your nappies are being made or the people who sew them. I think you absolutely should. The more people who do, the better. While price is not necessarily an indicator that there may be fundamental problems with how workers are valued or treated or the quality of the products, it often can be, so it bears serious consideration. We are the ones making decisions about the world our children (and the children of the world) will inherit, and those of us who are in the privileged position of being able to make educated and intentional decisions about our consumption should do so. It will have an impact.