Diary of a Husband: My Wife is Obsessed with Cloth Nappies 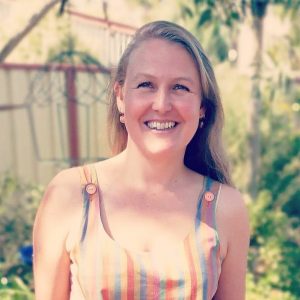 Jacqueline is a teacher, mother of two, freelance writer and cloth nappy obsessor.
You can find her on Facebook and Instagram as @PSDontTellMum and her blog at
jacquelinemaree.wordpress.com.

I hear my wife yell from the bedroom. “Make sure you use a nappy with A LINER!”

I swear my two year old, lying on the nappy change table, raises one eyebrow at me.

I grab a nappy from the bottom shelf, which I know is my daughter’s nappy shelf. I can see there is a liner in it, and start undoing the snaps – “Oh babe, maybe not that one.” My wife has apparated at the doorway. How did she get there so fast?

“Nah, nah babe grab a velcro one! Yeah that one – sorry, that other one is just a bit tricky even for me to snap on properly.”

I don’t ask questions. I do what she says.

I’m not really sure when my wife’s nappy obsession began. I suppose it was just over two years ago, when our daughter was born. Almost every day there was another package arriving, the bath tub would be filled with nappies, ‘doing an S and S’, whatever that was. Then my education started.

Oh yeah. You ask me, I know it. Difference between micro fibre and fleece? Got it. Absorbency of synthetic versus natural fibres? Yep, know it all. Everything is about nappies. Want to wash my clothes? Can’t wash them until the nappies are done. Why? Have to bulk up the nappy load with the small items.

Sometimes the obsessive touches on paranoia. The sun had gone down one night and I had promised to bring the clothes horse in by 7pm. At 7:30 my wife all of a sudden turned to me – turned on me – her face white with fear, “THE NAPPIES!! GET THE NAPPIES IN!”

“Okay, okay!” I move the nappies inside. Later she is folding and snapping and stuffing away, when she shrieks and jumps up, shoving a nappy in my face.

“SEE!? SEE? Spiders. Spiders babe.” She keeps folding but I can hear some Rainman-esque murmur barely audible over the TV. “Spider… spiders after 7… have to bring the nappies in before 7…” 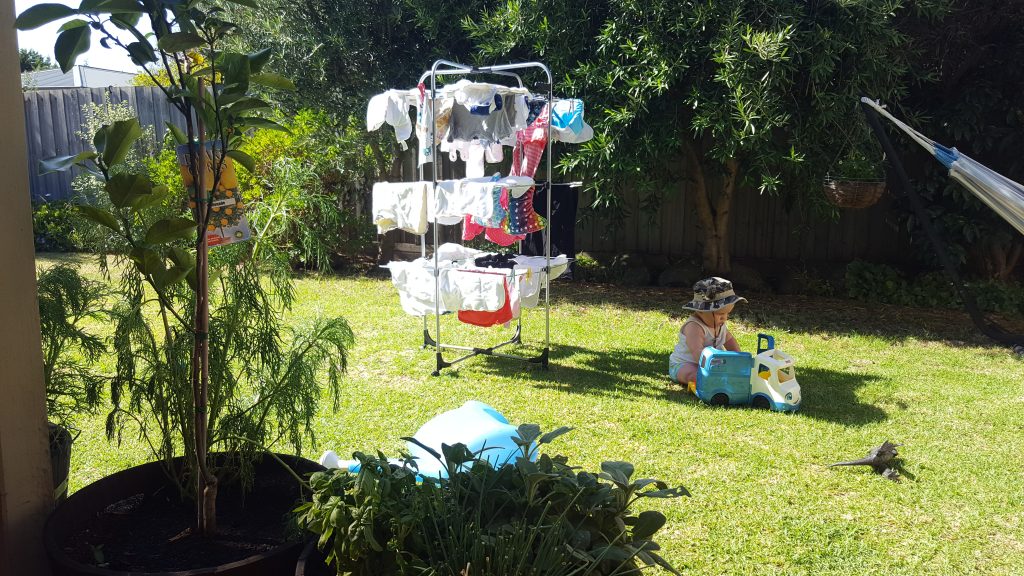 I know why she does it. I know why she gets elbow deep in poo every day and seems to spend all of her rare spare time hanging up nappies to dry. It’s so easy to grab a disposable, but I know that in every one she sees a waste of landfill space, a waste of resources, a small moment of harm that can be offset with every cloth nappy that is put on our children’s butts. I support her fully – BUT I’ve never dealt with a pooey cloth nappy. She deals with that, I think to ensure I suffer no trauma related to her environmental crusade and therefore will not resist.

I appreciate what we are doing here. However, I have some issues. When we had children, we decided that they would not feature heavily on social media. Then… my wife started writing for nappy companies. They started to send free nappies. Scrolling through Instagram, I was greeted by pictures of my children frolicking in our garden, their big cloth butts the focus of the shots. Our children have become cloth nappy PR machines. Once I found her taking photos of our son with a cloth nappy I had put on him. “Look babe! Just look how great you put on that nappy!” Ah, I’ve been listening, I tell her.

My other issue is that whenever we travel I feel like my wife begins a long and arduous testimony for why we should fill half our suitcase with nappies. Sometimes, you need to be practical, I say, and realistic. “…I know!” she exclaims, “I’ll take flats!”

We certainly have an extensive collection. When my wife buys new nappies, she justifies every purchase to me. I sometimes – okay often – drift in and out of her spiels about the need for a totally new system to cloth our large infant son. “… I mean the Velcro rubs on his legs, and these I mean, these don’t fit, and absorbency wise I’m just going to move to an anchor insert and bamboo trifold combo… what do you think?” Go for it, I say, if that’s what you need to do. “I’ll resell them” she promises, but then I find her creating a ‘trial pack’ of nappy types for friends of ours who want to give cloth a go. She gives them away, because she wants to help others find their way to the happiness that she feels.

“Oh, another person messaging me for nappy advice!” she’ll say, feigning exasperation but she is hopeless at hiding the pride she feels that people are seeking out her help.

We go shopping and she takes ages to return from the parent’s room for a nappy change. “Sorry,” she says, “A couple asked me about the cloth nappies, and I just had to have a chat with them!” Thought that might have happened, I say. “Oh,” she says, “Terrible nappy rash! I told them about cloth wipes…” A few minutes later and my wife has stormed out of Lincraft, declaring “No micro polar fleece! I mean seriously! Let’s go to Spotlight.” She emerges from there, triumphant, holding what looks like a huge fleecy blanket. She quickly explains, “I need to make them big this time. It will revolutionise poo removal. Also, I’m going to give them as presents!” She is stroking the fleece lovingly, like a unicorn she has finally caught. “Hey guess what? Lady in the fabric section said she sees HEAPS of mums buying fleece for nappy liners and so we had a chat about cloth, and guess what she said?…”

And, she’s off and racing about another big idea, her eyes alive with utter cloth nappy happiness.